The Plan: Fly to Venuzula

The plan is to head to Venezuela this Friday by plane. It has finally come to this after 14,144 km on the bus. Flights. Appalling. Regardless it will give me some extra time to check out Venezuela and Colombia before heading to Edmonton in early August to find a place to live.

I just arrived in a town called Cuenca, Ecuador from the beach town of Montanita. I do have a plan for a more detailed blog entry on Ecuador so I will save discussing Montanita until then. The most unusal part of Cuenca is the hotel I booked. Yes, not a typo for hostel. I am high rolling to the tune of $24 per night. It will be worth it for some hot water. 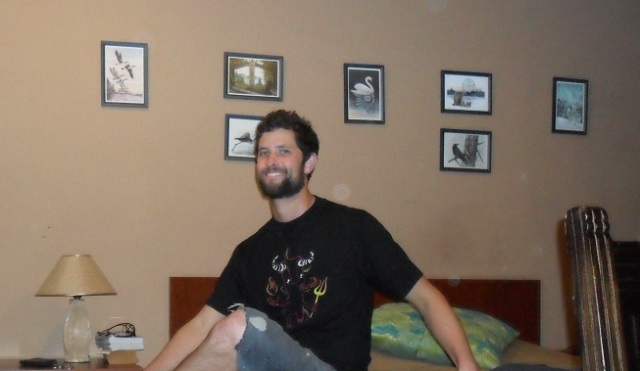 This photo has a few noteworthy elements, the most conspicuous being the Canadian art on the walls. A total of seven prints, all by a lady named Sue Coleman. It is outrageously Canadian – photorealist takes of animals like bears, wolves with the Native art style then paired up as a contrast. Also, there are totem poles and a longhouse. Cool to see down in Ecuador.

Of additional note is that I have an awesome devil t-shirt on. It’s hand painted in Montanita by a cool Argentinean couple I met there. The shirt’s protagonist looks like a toaster which is fun.

The dreadful beard, which does not look nearly as dreadful in this photos as real life, will have to stay now. It’s easier to make friends on buses looking like a man named Jebidiah who escaped from an Amish commune it seems. I had pretty much the whole bus (ok it was not that busy of bus) come up and hang out on the 4 hour ride here. And I made the mistake of lending my flashlight to some 10 year old boys who promptly went berserk and shined it in all available eyes. Then they found me playing Solitaire later. It was a bad moment. Who plays that drivel anymore? I keep forgetting to get a chess game on my computer. Regardless I was busted and they wanted to play. So I promised them that it is the most inane, frustrating game ever. But that sales pitch did not deter enough and it took them 10 minutes to figure out that I was not kidding – it really is not a fun game.

The remnants of my pants are in sight too. I had to crop the photo lest it look like I am riding a chicken. It was hot in the surf town and I needed shorts. I have lost two pairs of shorts already, so I just lopped the legs off the jeans. Turns out this is socially acceptable these days as far as I can tell. And it’s not even the early 90’s either, so that’s a bonus.

The pants idea might not have been the best. This new town is a lot higher in elevation and it shows by being really cold. The sequence of cities perhaps was not terribly well thought out.

Speaking of shorts, there is a good list of things that have mysteriously disappeared. I am now packing lighter than before. Theft and carelessness combine to make it easy on the back.

North Face Jacket
-replaced with a XXL sweater from Bolivia. To get the arms the right length the torso looks like flying squirrel. It is wide enough for three of me to fit.

Underwear (x2)
-replaced with progressively more and more pairs. I am trying to minimize laundrys like back at home it seems.

Soccer Shorts
-replaced with short shorts from a road vendor. They are rather short which is not cool.

First Aid Kit
-replaced with stuff from the Bolivian pharmacy

Another Shirt
-replaced by tacky ‘I survived the death road’ shirt. It came with the tour. I did not buy it. Seriously.

iPod… near miss! I actually recovered it.

Lonely Planet book
-I scored a better one at a book exchange. Newer and prettier. Too bad it turned out to be in French. Probably should have checked that first. I traded this for a horrifically ugly one, but in English.

My Sedaris book.
-A few says at the post office. This sucks because it had a big smoking skeleton on the black cover so it looked pretty badass.

My replacement toiletry bag.
-Seriously, why steal that? I had left it on a bus seat for all of a few minutes and that was that. All this replacing stuff is getting me used to the pharmacies and buying deodorant and toothpaste. But I get all francais-ish with the dental floss, I can never remember the name and call it dente friese. Think its french… Blank stares (deserved ones) until the manic gesturing starts.

Weight.
-I am 16 lbs lighter than last time I checked a few months ago.

But it is not too big of a deal. I have added some things like the devil shirt, a shark’s tooth and a new respect for malicious ocean currents.

This entry was posted in Uncategorized. Bookmark the permalink.